The Demise of Virtue in Virtual America

“David Bosworth is a first-rate cultural critic who brings to vivid life the full range of issues confronting us at the present moment. To read him on what has lately happened in American society is to become suddenly alert to the interpenetration of political, economic and cultural forces and to the fact that the most important questions we face are not primarily political in nature, however they may seem in a media-saturated age. Though Bosworth operates comfortably within the discourse of the academic left, he is by no means the prisoner of an ideological constituency. In fact he writes with extraordinary grace and lucidity and calls to mind the work of earlier practitioners like Christopher Lasch, Jacques Ellul and David Riesman, each of them notable for their cogency and for combining a devotion to understanding the past with a passion for confronting the present.”

“I’ve been reading David Bosworth’s insightful work for many years, and always find my dearly held positions on poetry and the culture we inhabit altered and deepened in important ways. He is a brilliant contrarian, the kind of thinker who identifies and cuts through what passes for the true, and provides us with the language for what we only half-knew prior to reading him. His new book does this, and more. Like all great moral thinking, it’s a warning and a beacon. It’s Bosworth at his best.”

“As a reader, editor, and publisher of David Bosworth’s essays for more than two decades of my tenure with The Georgia Review, I have been ever more impressed by his commitment to providing qualities that are vital yet increasingly missing from writings about crucial political and cultural matters: a long sense of history; a respect for facts; an evenhanded approach to analyzing those facts; a readiness to speculate intelligently (and often entertainingly); and a lucid—I am tempted to say poetic—writing style. Bosworth is, to my mind, a secular Emerson for our time.” 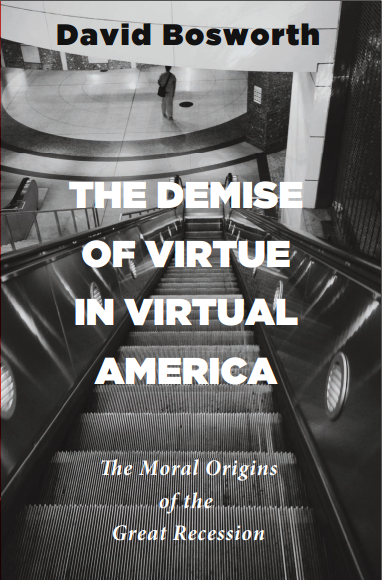 a) Questions Answered about The Demise of Virtue

b) An interview with David at Boston College

c) A review of The Demise of Virtue in “The Nation”

d) An Op-Ed by David posted on  PBS